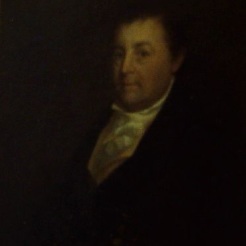 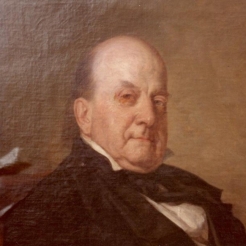 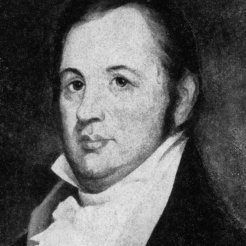 Note: Hon. William P. Roper, Fleming County, is not listed due to a lack of portraiture.

Established in 1816, a group of dedicated Kentuckians aspired to create a facility for Kentucky’s poor and insane. Shortly after, the citizens formed a committee and began seeking public donations to help secure a location and begin building the facility. By 1817, the cornerstone for the Fayette Hospital was laid and it appeared that progress would be made quickly. Unfortunately, the financial crisis beginning in 1819 resulted in abandoning the unfinished but nearly complete building. The Commonwealth purchased the land and the Fayette Hospital building in 1821 and, by a legislative act, the Lunatic Asylum of Kentucky was formally established. Funds were appropriated to complete the unfinished building and discussions were held about adding two additional wings; at the time, the additional wings were not built and thus the hospital would house approximately 120 patients.

On the first of May in 1824, the Lunatic Asylum of Kentucky opened its doors and accepted its first patient. The first patient admitted to the asylum was a “negro” woman from Woodford County. The original hospital, Fayette Hospital, was designed as a medical facility rather than one for housing the insane. As such, large, open wards with many beds housed the patients. By 1825, overcrowding and lack of basic necessities (like heat for all of the patients) became an issue. Money was appropriated for building an additional wing on the hospital. Later the next year another wing was built. The hospital continued to grow through the 1830s with a number of additions being constructed. These additions permitted room for the superintendent, his family, attending physicians, and staff to stay on the grounds along with kitchen and other facilities.

By the middle of the 19th century, a fire had completely destroyed some of the original building. Marginal improvements were made over the following decades such as switching to gas lighting, a public utility at that point, along with replacing bathtubs and making other repairs. In 1867 a new building to house women was completed—a new interventional approach, courtesy of Dr. Thomas S. Kirkbride, that posited segregating men and women as being preferable and advantageous.

The majority of patients at the asylum were considered paupers and the Commonwealth covered the expenses for their care. There were, however, a small number of boarders who paid to stay at the asylum. An early, well-known patient, was Henry Clay’s son, Theodore. According to annual reports from the asylum, there’s evidence that paying boarders, such as Theodore, were given preferential treatment.

Activist for the indigent insane, Dorothea Dix, visited the asylum twice over a period of about 10 years where she advocated for better treatment of the insane, including humane living conditions. By the time the U.S. Civil War began, and as a result of Ms. Dix’s visits, more buildings were constructed. After the war ended, money was appropriated to expand an existing building, some 200 yards away from the main building, to house “negro” patients. By the end of the 19th century, the superintendent cautioned that living conditions for “colored patients” were unfit, poorly ventilated, and dilapidated. While expansions were made, it doesn’t appear that a new building was constructed for African American patients until the middle of the 20th century, named after well-known African American physician Dr. Thomas T. Wendell.

By the turn of the 20th century, more buildings had been constructed, including a new and modern laundry facility. Tuberculosis, commonly called the white plague, began devastating hospitals and communities throughout the country. A tubercular hospital was constructed on the campus of the asylum and completed in 1914. During the late 1920s, a new nurse’s home was constructed to house asylum nurses. By the end of World War II the population of the asylum was over 2,000 patients. Electroconvulsive therapy, Metrazol therapy, and Insulin therapy were being utilized on the patients. Although not as frequently used in other facilities, a limited number of lobotomies were performed at the asylum. By the end of the 1960s, the patient population fell below 1,000.

In 2013 a new and modern facility was completed and opened. The old property was sold to the Bluegrass Community and Technical College and the original asylum buildings were demolished  by 2014. The administration and laundry buildings are the only original buildings that remain. A small cemetery exists on the old property.

Across the expansive campus of Eastern State Hospital, mass unmarked graves have been discovered since the 1980s. Traditionally, many patients without families or financial resources were buried at the hospital once they died. Given the significant span of time that the hospital has been operating, many patient’s records have been lost or destroyed. It is generally accepted that 4,000-6,000 patients were buried on the grounds of Eastern State Hospital. However, it is posited by some that as many as 10,000 patients were buried there in its nearly two-century history.

Names Used by the Hospital

Important note:
If you would like to use any information on this website (including text, bios, photos and any other information) we encourage you to contact us. We do not own all of the materials on this website/blog. Many of these materials are courtesy of other sources and the original copyright holders retain all applicable rights under the law. Please remember that information contained on this site, authored/owned by KHI, is provided under a Creative Commons Attribution-NonCommercial-NoDerivatives 4.0 International License.

Photographs, text, illustrations and all other media not authored by KHI belong to their respective authors/owners/copyright holders and are used here for educational purposes only under Title 17 U.S. Code § 107.